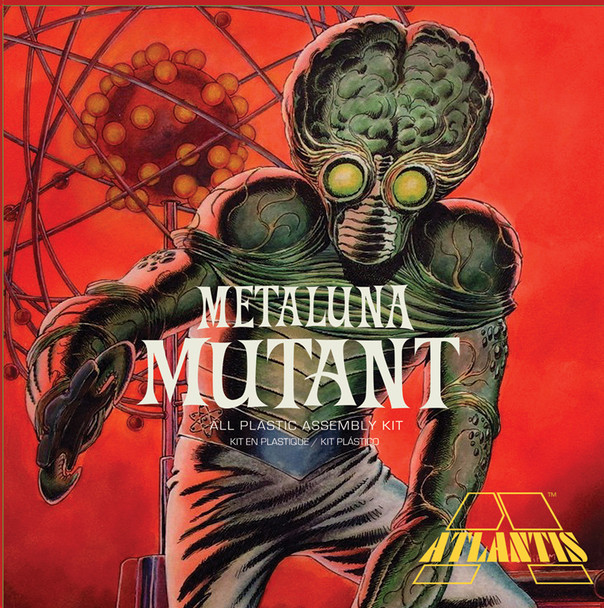 SKU:
3005
UPC:
MPN:
Condition:
New
Availability:
In Stock
Shipping:
Calculated at Checkout
How tall is the model when complete:
The model stands 7 inches tall
What age is recommended:
Ages 14 and up
What paints do I need:
We recommend Black, Green, White, Silver, Red, and Yellow
Does it come with paint and glue:
Paint and glue are sold separately
How many parts are included:
27 parts

Metaluna Monster Figure. The tooling is based on the Aurora Pattern. Aurora never actually produced the kit. It was supposed to be part of the Monsters of the Movies line. The Atlantis kit comes from all new tooling. Box art by Dave Cockrum in the classic 8.25 x 8.25 square box. New Detailed instructions. This a limited Edition Kit. Only 4000 being produced. Molded in a beautiful Metallic Blue.

They were bred and bound as slaves on the distant planet Metaluna. The ruling Metalunians
engineered these “mutants” to be laborers, likening them to the mere insects found on Earth.
These mutants, however, have tremendous strength and a robust exo-skeleton; only their
enlarged brains are subject to external damage. Now, the Metalunians must flee their planet before its fiery transformation into a flaming star.
The mutants are left for dead...all except one, which has secretly boarded the escape
spacecraft. It has murderous intent against the Metalunians who callously discarded
the species. The final confrontation is coming...

MSRP:
Now: $21.99
Was:
1/500 Scale. This kit features 144 parts and measures 17 3/4 inches long. Molded in gray with display stand and decals for both Washington and Carolina battleships. Model was built and painted by Guy...

MSRP:
Now: $18.99
Was:
Digging deep into the tooling comes the classic Monogram Dragster. This all plastic kit comes all molded in white, Does not have chrome parts or rubber tires- a real classic. All new artwork created...

MSRP:
Now: $8.99
Was:
Monster Glow parts set F includes all the parts for everyone's favorite Aurora monster kit in 1/8 scale. Includes everything you see in the picture - head, hands, shoes, rope knot for waist, and foot...

MSRP:
Now: $8.99
Was:
Monster Glow parts set D includes all the parts for everyone's 2nd favorite Aurora monster kit in 1/8 scale. Includes everything you see in the picture - head, hands, bats, tufts of grass and spider...

MSRP:
Now: $32.99
Was:
Dimensional Branding Group (DBG) and World Builder Entertainment are excited to announce a new agreement between DeVito Artworks and Atlantis Toy and Hobby to bring the original 1960’s King...

MSRP:
Now: $29.99
Was:
Monitor measures 8.25" long and Merrimac measures 14" long. Please note this tooling comes from Lindberg originally not the Pyro tooling. Completely different. The Merrimac Scale is 1/300 and the...

MSRP:
Now: $39.99
Was:
1/1200 Scale. This set of ships comes from the old Renwal tooling, not seen in over 50 Years. This set comes with decal sheet, detailed instructions, and 12 highly detailed ships. The back of the box...

MSRP:
Now: $18.99
Was:
Digging deep into the tooling comes the classic Monogram Dragster. This all plastic kit comes all molded in white, Does not have chrome parts or rubber tires- a real classic. All new artwork created...

MSRP:
Now: $21.99
Was:
1/135 Scale. This Convair 990 Airliner comes from the vintage Revell tooling. All new box art and NASA decals created by Starfighter Decals with box art by Rusty Cowart. This mold needed some work as...