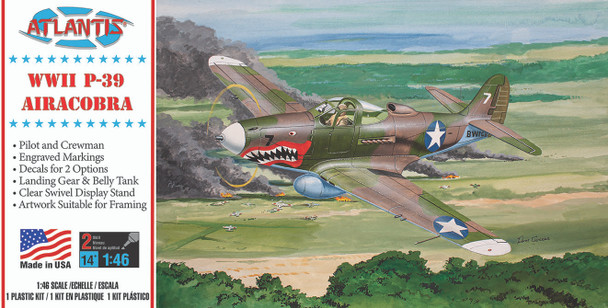 1/46 Scale. Derives from the original Revell tooling kit#H222. In the Revell Guide by Tom Graham it lists this mold as being altered to make the prop a 4 blade and insignias removed for the H144 Bell Cobra Racer. However this in not true there are two molds for this kit. The orignal P-39 WWII with engraved markings was never altered and the the newer H144 Bell cobra racer as it was made,  we have both. This was a surprise to us as well.

However upon opening this tool for the H222 we had some pitting in the upper wing and some other areas which is being smoothed out. See photo with problem area circled in white. Remember this is hardened steel not Joint compound. So smoothing it out takes a lot of work!

Along the way some water must have entered the tool causing this damage. Now it will never be perfect due to the raised rivets, but we will polish it out best as we can in the shop.

This kit is upgraded with new box art by Don Greer and includes decals for the Original version and the new shark mouth version which really grabs ya! Also comes with the famous Atlantis swivel stand.

The P-39 Airacobra was developed in 1939 and was an aircraft that became famous for its engineering innovations. The Allison engine, which cranked out 1150 horsepower at 3000 RPM, was mounted behind the Pilot, driving the propeller by means of a lengthened drive shaft through a reduction gear box mounted in the forward section of the fuselage.

The Airacobra was the principal American fighter aircraft when the US entered World War II. It was produced in large numbers, and was used by both the US Air Force and the Royal Air Force. It was also used very successfully by the Russians as a tank destroyer. Its top speed was rated at 400 miles per hour. With a combat ceiling listed at 36,000 feet, the P-39 had to carry full oxygen equipment.

The Airacobra was one of the outstanding aircraft of World War II, and saw service in almost all theatres. Its versatility made it an important factor in the early stages of the war.

1 × 37 mm M4 cannon in nose (firing through the propeller hub) with 30 rounds of HE-T ammunition.

MSRP:
Now: $49.99
Was:
1/8 Scale. Preorder Officially licensed with Tom Daniel! Artwork is not final. This item is scheduled to be at our warehouse late MAY 2020.Update: Shipping in 2 weeks.It derives from the Monogram...

MSRP:
Now: $21.99
Was:
1/104 Scale. This kit derives form the classic monogram tooling. This was of the first Aircraft kits they produced along with the B-26 and the B-25 which we also own the tooling for. The kit features...

MSRP:
Now: $26.99
Was:
1/8 Scale. This kit will feature all parts molded in gray with a special tree of spooky parts model in glow in the dark. It will come packaged in the old style square box featuring a new Atlantis...

MSRP:
Now: $21.99
Was:
1/104 Scale. This kit derives form the classic monogram tooling. This was of the first Aircraft kits they produced along with the B-26 and the B-25 which we also own the tooling for. The kit features...

MSRP:
Now: $21.99
Was:
1/184 Scale. Derives from the original Revell Tooling. We have molded this kit in shiny silver and clear, swivel stand molded in clear with spring ring and small globe stand molded in silver. Updated...