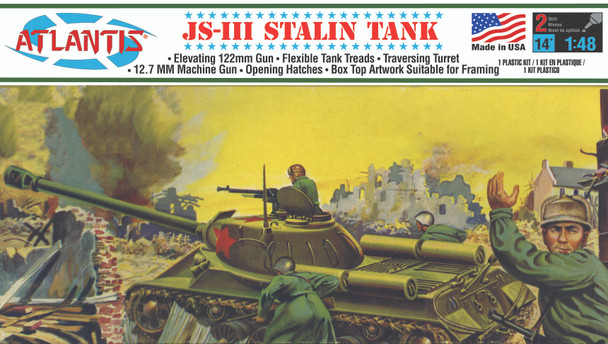 Check out this great video build by HPI guy

JS-III Stalin Tank.
In 1943 the Russians developed the famous T-34 tank which did much to help drive the Nazis from their homeland. The T-34 was heavily armored and mounted a large caliber gun in a single 360-degree traverse turret. This tank set the pattern for future Russian tank design and strongly influenced foreign designs including the world-famous Panther Tank produced by Germany during World War II. The Panther copied much from the T-34 and the Germans developed these ideas into an even better fighting machine. With the introduction of the T-34, the large gun, heavy tank race was on. The Russians, utilizing the experience gained with the T-34 design, came out with the KV-2, a 52 ton, 76mm gun tank which was quickly followed by the first of the Stalin Tank series, the JS-1. This new design was a 57 ton 122mm gun tank which first appeared in 1945 and was improved in the following years to produce the Joseph Stalin III.
The JS-III Tank incorporated two conspicuous departures in armor design that were entirely new in tanks. The first is a prow-shaped front hull, technically called compound obliquity. A shell striking the front of the tank must, because of the sharply angled plates, penetrate a thicker section of armor than would be encountered in a flat vertical plate. The second radical feature is the turret, which is the first turtle-back design on a standard tank. Because it is cast in steel with varying wall thicknesses, this type of turret affords greater protection against high velocity anti-tank shells at a substantial savings in weight, while still being sufficiently protected on the top surface.
The JS-III mounts a high-velocity 122mm cannon which fires a 50 lb. shell. Because of the size of these shells, not many can be carried in the closely-packed turret. Another disadvantage of this gun is that the shells are hand-fed into the breach. A slower rate of fire is affected by this, and this is critical when the first few rounds of a tank battle count. The only other armament on the JS-III Tank is the 12.7mm DSHK machine gun mounted on top of the turret in front of the Commander's hatch. Periscopes are provided for both driving and observation to cut down the number of openings into the interior, and all steering instructions are radioed from the Commander's hatch.
The JS-III is powered by a 60-degree V-type 12 cylinder, liquid-cooled diesel engine which gives the tank a top speed of 20 miles per hour. The tracks are large and widely spaced, exerting 11.6 pounds per square inch making it possible for the JS-III to cross over soft ground that would bog down even lighter, smaller tanks.

MSRP:
Now: $21.99
Was:
1/48 Scale. This kit has not been available for over 45 years. Comes from the Helicopter of Industry tooling which was sold to Aurora in the 1950's.The model comes molded in Olive Drab and clear...

MSRP:
Now: $19.99
Was:
PREORDER. 1/48 Scale. To continue the 1/48 Auto series this kit comes from the old revell tooling with the multi part cab. We have updated the kit by cutting a new mold for the clear parts. This is...

MSRP:
Now: $21.99
Was:
1/184 Scale. Produced from the original Revell Tooling. We have molded this kit in shiny silver and clear, swivel stand molded in clear with spring ring and small globe stand molded in silver...