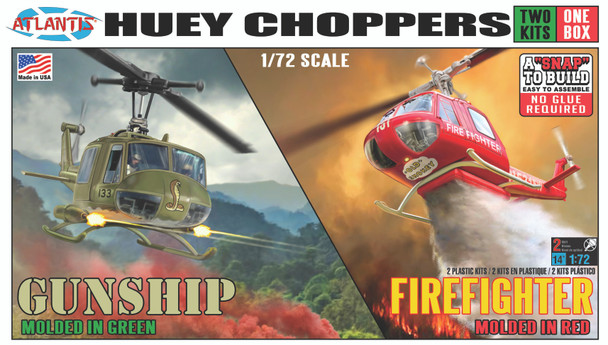 SKU:
M1026
UPC:
850002740219
Condition:
New
Availability:
Usually Ships in 24 Hours
Shipping:
Calculated at Checkout
Do you get 2 models:
Yes 2 kits are included with waterslide decals
How big are they:
Measure 7 inches long.
What colors:
they come molded in Green and Red

1/72 Scale. This issue comes with 2 complete chopper kits. One molded in red for Fire fighter version and one molded in green for Vietnam Gunship version.

Although originally designed for the US Army, the Bell Iroquois has become a general purpose workhorse of a helicopter. It is ideal for operation as an executive transport, but has proven to be very successful as a flying crane, ambulance, or rescue helicopter. Equipped with an external belly tank, the Huey is an excellent fire fighter. Due of their size and maneuverability, they are able to get a fire contained in some very challenging topography. With the recent rise in wildfires, this has become even more important. Cal Fire and Washington State's Dept of Natural Resources have found the Huey to be a valuable addition to their emergency response teams.

During the 1960's, the lack of effective close air support aircraft led to the creation of the UH-1B "Huey" Gunship. Fitted with various guns, these armed helicopters were used quite successfully in Southeast Asia. Your model is fitted with two exteranlly mounted .50 caliber machine gun pods. The "Huey" is the most universal military aircraft of the modern era, serving in all four branches of the American uniformed services and also in the armed forces of at least 48 other nations.