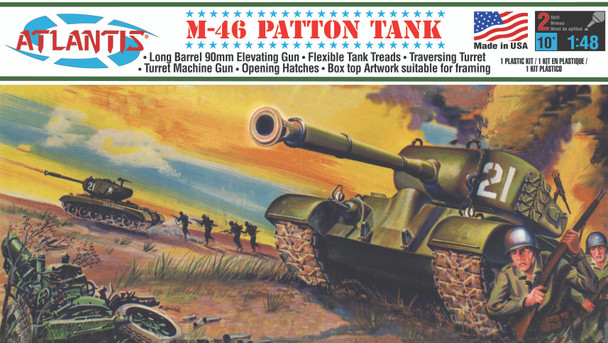 SKU:
A301
UPC:
850002740240
MPN:
Condition:
New
Availability:
Usually Ships in 24 Hours
Shipping:
Calculated at Checkout
How long is the model when complete:
The model measures 7 inches long
What age is recommended:
Ages 14 and up
What paints do I need:
We recommend Black, Brown, Light Green, White, Flesh, Dark Grey
Does it come with paint and glue:
Paint and glue are sold separately
How many parts are included:
127 parts

1/48 scale. Features long barrel 90mm elevating Gun, flexible tank treads, traversing turret, turret machine gun, opening hatches, Comes with 4 figures, decals, detailed instructions. Molded in Olive drab. Skill level 2 for ages 14 and up.On June 25, 1950 the North Korean Communist forces invaded South Korea. The first U.S. troops to come to the aid of South Korea landed in July, 1950. These were hastily dispatched from Japan and brought with them the M-24 fighting tanks. Apparently they had been selected for duty in Japan because of their light weight. Anything heavier would have been too much for the Japanese roads and flimsy bridges. Their inferiority to the Russian supplied equipment was immediately obvious. The first man-sized tank on the job was the M-26 General Pershing with a weight of 45 tons, mounting a 90mm gun and having a top speed of 25 mph.Next in action was the M-46 General Patton, our only post-war tank, which was one of the first U.S. designs produced by evolution from the M-4. The Patton is similar to the Pershing at first glance. However, it is a superior tank, having a speed of 35 mph on the open road with a weight of 47.5 tons. It is equipped with a 90mm gun as on the Pershing tank, but is heavier and harder hitting, with higher muzzle velocity. The ammunition used is an improvement- utilizing a shaped charged shell. The muzzle-brake, a single baffle type, was found to be as efficient as the double baffle type on the Pershing. The Tank has a 30 cal. coaxial bow machine gun and a 50 cal. anti-aircraft gun mounted beside the tank Commanders' hatch on the turret. This latter gun was occasionally moved to a mount in front of the Commander's hatch for easier operation against ground forces during the Korean War.The Patton has an 810 hp. 12 cylinder V-type engine, one of a whole family of air-cooled jobs the Army has found to operate equally well in the hottest desert or the coldest Arctic wastes. Turning out more power in less space than the old liquid cooled engines, a characteristic of the installation on this tank is the exterior exhaust and muffler, one for each bank of cylinders. Unfortunately, they glow cherry red when hot, making a good night target.The new steering and transmission are connected to a "Wobble-stick". This operates similar to an airplane joy-stick. Pushed all the way forward the transmission is in neutral. Pulled back one notch puts the tank in low gear. All the way back is the reverse position. No clutching is required of the driver, the transmission is a hydraulic torque converter, like the Buick Dynaflow. In any gear the driver steers by pushing the "Wobble-stick" to the right or to the left. Steering is hydraulically aided. It is said to be easier to drive than a passenger car!This tank has a torsion bar suspension system, the bars twisting to take up the shock as the "Bogie" wheels roll over rough ground. With its easy handling, this tank can turn in its own length.The first models were being tested in the fall of 1949, with production beginning in the spring of 1950. Two battalions were trained at Fort Hood in the US and saw their first action in Korea with the 3rd and the 7th Infantry Divisions. Later these tanks were furnished to the 40th Division. The Patton tank is considered as the world's best medium tank of its time, having speed and mobility, and being able to make faster, smoother turns than the Russian T-34. It represents an advance in the kind of design initiated by the Germans. The Army claims that "the Patton is more than a match for the Red T-34 and further that it can penetrate the Stalin III over most of its surface.
View AllClose

MSRP:
Now: $21.99
Was:
1/48 Scale. This kit comes molded in olive drab with 96 parts and 10 black rubber tires. All from the original Aurora molds. We also included a new decal sheet that was not in the original issue...

MSRP:
Now: $7.49
Was:
This Liquid Cement With Applicator is fast drying and comes with precision applicator for precise application of cement. Joining polystyrene to polystyrene, it is excellent for model kits or use it...

MSRP:
Now: $21.99
Was:
1/48 Scale. This kit comes molded in olive drab with 96 parts and 10 black rubber tires. All from the original Aurora molds. We also included a new decal sheet that was not in the original issue...

MSRP:
Now: $21.99
Was:
1/48 scale. This kit has not been reissued since the 1970's. Comes molded in olive drab with flexible rubber tracks. Instructions and 3 crew figures included. Decals for US and West German versions...