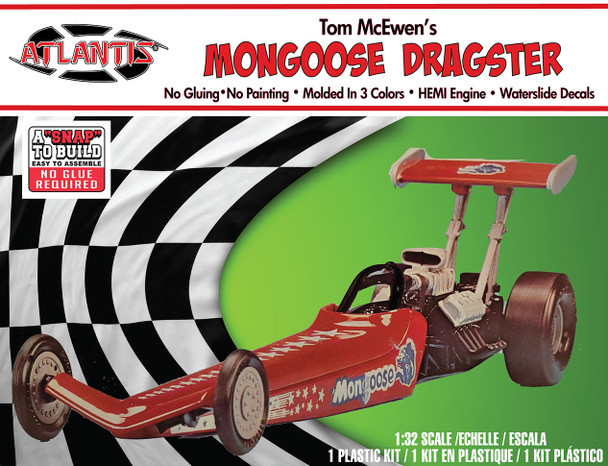 Tom McEwen was an American drag racer and a winner of the National Hot Rod Association (NHRA) U.S. Nationals. His racing career spanned 45 years. He is ranked at number 16 on a list of the 50 most significant drivers of NHRA’s first 50 years.
He received the nickname "the Mongoose" in 1964 from engine builder Ed Donovan. It was originally used as a device to entice Don "the Snake" Prudhomme into a high-exposure match race.

In 1972, McEwen won his first major event when he dominated the Top Fuel field at the Bakersfield March Meet. A year later, he scored his first NHRA national event victory by topping the Funny Car field at the SuperNationals at Ontario Motor Speedway.

He went on to win four more national events, including his dramatic U.S. Nationals Funny Car victory over Prudhomme in 1978. The win came only a few days after the death of his son Jamie, who had battled leukemia.

McEwen won the AHRA World Finals at Spokane Raceway Park in 1982, the prestigious Big Bud Shootout in 1984, and Top Fuel at the 1991 Summernationals at Englishtown, New Jersey.

He retired from racing in 1992, and was inducted into the Motorsports Hall of Fame of America in 2001.

MSRP:
Now: $21.99
Was:
PREORDER. 1/67 Scale. This kit comes from the old monogram tooling. Will be molded in silver with clear parts and landing gear. Updated decals and artwork. Skill level 2. Officially licensed with...

MSRP:
Now: $21.99
Was:
1/70 Scale. Comes crisply molded in silver and clear with our famous clear swivel stand. From the classic Revell tooling. Brought back to it's original form. Complete with original decals and...

MSRP:
Now: $9.99
Was:
1/25 Scale. Competition Wheels and Mags Chromed Custom Car Parts. You get the bagged frame as shown in the picture and we can email you the basic instruction page illustration.

MSRP:
Now: $2.49
Was:
2022-23 12 page Pamphlet full color catalog. You can view the catalog online or purchase a printed copy for your collection.https://drive.google.com/file/d/1KGOzi5Hino-PJycceL0M5Jl_9w613O5x/view

Snoopy and his Sopwith Camel with Motor SNAP

MSRP:
Now: $29.99
Was:
Snoopy and his Sopwith Camel Snap Model Kit w/Motor: Considered to be the most popular model kit of all time and it has never been reissued! Snoopy is ready for battle against the dreaded Red Baron,...

Tom Daniel Whiplash Funny Car 1/32 Made in the USA

MSRP:
Now: $21.99
Was:
Designed by Tom Daniel and officially licensed. 1/32 Scale. A snap to assemble, however the details are COOL! Wild Tire burning funny cars are big at the the drag strip! The body of this model has...