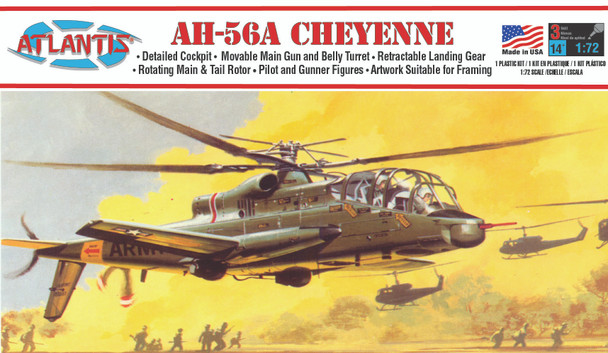 SKU:
A506
UPC:
850002740301
Condition:
New
Availability:
Usually Ships in 24 Hours
Shipping:
Calculated at Checkout
does it come with decals:
waterslide decals are included
How many parts:
36 parts
How big is the model:
9.5 inches long rotor diameter is 8.50 inches
does it have to be put togteher:
yes assembly is required
what skill level and age is recommended:
Skill level 2 for ages 12 and up
does it come with paint and glue:
No
what colors are recommended:
black, silver, yellow, red, white and flesh

Check out the review at Cybermodeler

Check out the review with Dem Brudders

Background of the AH-56A Cheyenne:

Following a hotly-contested design competition, Lockheed received in March 1966 the US Army contract for development of an Advanced Aerial Fire Support System helicopter to replace the armed helicopters of the time. A dynamic test model was completed in May 1967 and the first flight of a genuine AH-56A prototype took place on September 21, 1967. One of the dramatic design features is the narrow fuselage cross-section which is made possible by the tandem seating arrangement of Pilot and Gunner. Unfortunately, a fatal crash of one of the prototypes, development delays, and the political climate led to the cancellation of the overall program.

MSRP:
Now: $21.99
Was:
1/72 Scale. This issue comes with 2 complete chopper kits. One molded in red for Fire fighter version and one molded in green for Vietnam Gunship version.  Huey FireFighter Chopper Although...

MSRP:
Now: $21.99
Was:
1/72 Scale. This issue comes with 2 complete chopper kits. One molded in red for Fire fighter version and one molded in green for Vietnam Gunship version.  Huey FireFighter Chopper Although...