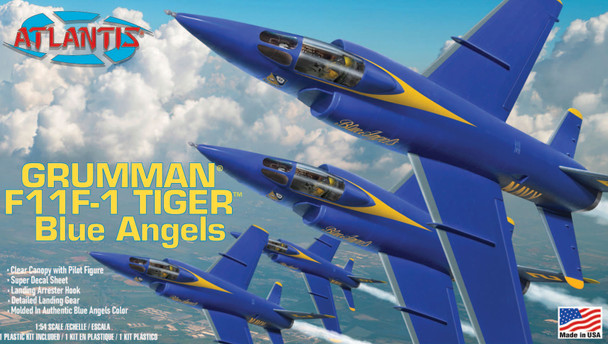 SKU:
H169
UPC:
MPN:
Condition:
New
Availability:
Usually Ships in 24hrs.
Shipping:
Calculated at Checkout
How long is the model when complete:
Measures 9.75 inches long with a wingspan of 7 inches
What age is recommended:
Ages 14 and up
What paints do I need:
We recommend Black, Silver, Khaki, Green, Yellow and Flesh
Does it come with paint and glue:
Paint and glue are sold separately
How many parts are included:
31 parts

1/54 Scale. Comes molded in blue and clear, with updated decals to complete either early or late version of F11F-1 in Blue Angels markings.  Detailed cockpit with Pilot and detailed landing gear.  This aircraft does not have the slot in the fuselage. If you would like to add the swivel stand you must cut a slit in the fuselage. You can see the outline of the slot and it should be very easy to replicate the original slot to accept the pivot ball. You much purchase the swivel stand separately. We have included the decals for the stand as a bonus.  31 parts. Measures 9.75 inches long with a wingspan of 7 Inches. Skill level 2.

Check out this review by DemBrudders

As well has being a first-line fighter in the US Navy, the Tiger also served as the plane used by the Blue Angels, the Navy's Precision Aerobatic Team. Designed by Grumman to fill the Navy's need for a powerful, hard-hitting aircraft, with the ability to take the fight to the enemy's home ground, the Tiger carried the most modern armament available at the time.
The Tiger was the first swept-wing jet to make use of the "area rule" or "wasp waist" type of fuselage. It had a wingspan of 31 ft 8 in, and a length of 40 ft 10 in. Power is provided by a Wright J65 axial-flow turbojet with afterburner, giving the aircraft a speed of Mach 2.03 or nearly 1,500 miles per hour.

MSRP:
Now: $21.99
Was:
1/500 Scale. This kit features 144 parts and measures 17 3/4 inches long. Molded in gray with display stand and decals for both Washington and Carolina battleships. Model was built and painted by Guy...

MSRP:
Now: $29.99
Was:
1/25 Scale. This kit comes from the old Custom Car Parts series. Atlantis has retooled and fixed many of them to bring this kit back to life. The kit is molded in white, with chrome parts and newly...