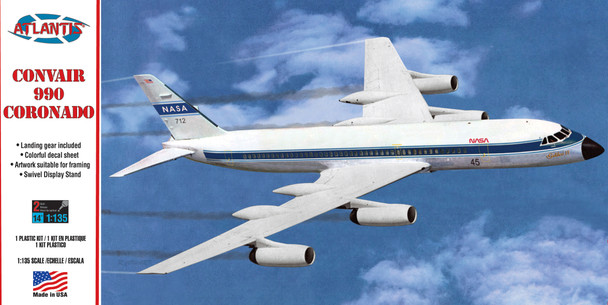 SKU:
H254
UPC:
MPN:
Condition:
New
Availability:
Usually Ships in 24hrs.
Shipping:
Calculated at Checkout
How long is the model when complete:
Measures 12.5 inches long with a wingspan of 10.75 inches
What age is recommended:
Ages 14 and up
What paints do I need:
We recommend Black, Blue, White, Silver, and Red
Does it come with paint and glue:
Paint and glue are sold separately
How many parts are included:
59 parts

1/135 Scale. This Convair 990 Airliner comes from the vintage Revell tooling. All new box art and NASA decals created by Starfighter Decals with box art by Rusty Cowart. This mold needed some work as all the injector pins were a bit too short and had to be shimmed up. This kit does not include any clear parts, however we have included the swivel stand. The slot in the fuselage will need to be cut out with a hobby knife to accept the mounting ball.


The Convair 990 Coronado was the first airliner in the world designed to operate at near-sonic speeds. It was powered by four General Electric CJ805-23 aft-fan jet engines, and had a cruising speed of Mack .85 at 35,000 feet. Each engine was rated at 16,100 pounds of thrust. It was the world's fastest commercial airliner at the time.The Coronado had a wingspan of 120 feet and an overall length of 139 feet 2.4 inches. It was designed to carry 96 first class passengers in 4 abreast seating or 121 coach passengers in 5 abreast arrangement. Constant sea level cabin pressure was maintained in order to provide maximum passenger comfort, and great care was given to lighting and interior decoration.Landing speeds of the Convair 990 duplicated those of the space shuttle orbiters so NASA used them as Landing Systems Research Aircraft (LSRA) to test space shuttle landing gear and braking systems. These tests were part of NASA's continuing effort to upgrade and improve space shuttle capabilities.

MSRP:
Now: $26.99
Was:
2nd issue by Atlantis! 1/96 Scale. From the Original Aurora Tooling which was updated by Monogram in the late 1970's. Kit is molded in white with clear part for windshield. Decals for Boeing...

MSRP:
Now: $39.99
Was:
1/1200 Scale. This set of ships comes from the old Renwal tooling, not seen in over 50 Years. This set comes with decal sheet, detailed instructions, and 12 highly detailed ships. The back of the box...

MSRP:
Now: $39.99
Was:
Metaluna Monster Figure. The tooling is based on the Aurora Pattern. Aurora never actually produced the kit. It was supposed to be part of the Monsters of the Movies line. The Atlantis kit comes from...

MSRP:
Now: $29.99
Was:
1/25 Scale. FROM THE OLD REVELL TOOLING.This classic Tri-Five Chevy comes molded in white, clear and chrome with updated 1 piece rubber tires and a new decal sheet. Can be built as stock or drag...