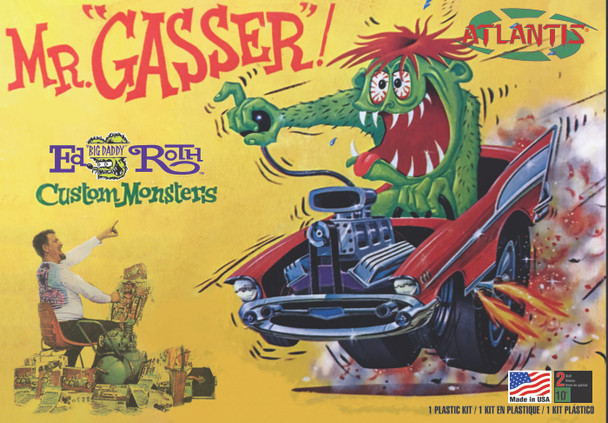 SKU:
H1301
UPC:
MPN:
Condition:
New
Availability:
Usually Ships in 24 Hours
Shipping:
Calculated at Checkout
How tall is the model when complete:
The model stands almost 7 inches tall
What age is recommended:
Ages 14 and up
What paints do I need:
We recommend Black, Green, Purple, Red, Silver and Yellow
Does it come with paint and glue:
Paint and glue are sold separately
How many Parts:
38 parts

1/32 Scale Roughly!  Molded in white the kit includes metal axles and decal sheet for the car and eyeballs. One of our favorite creations from the King of Monster Painters Ed Big Daddy Roth.  Mr Gasser figure stands on his own. This kit features retro box art and is officially licensed. What a classic!

Ed "Big Daddy" Roth was an American artist, cartoonist, illustrator, custom car designer, pinstriper, and builder. He created the hot rod icon Rat Fink and other Fink characters. Roth was a key figure in Southern California's Kustom Kulture and hot rod movement of the late 1950s and 1960s. By the August 1959 issue of Car Craft his airbrushed Weirdo shirts had become a full-blown craze. His many show rods later became some of Revell's most popular model kits

MSRP:
Now: $49.99
Was:
1/8 Scale. Molded in Metallic Purple, 2 huge sprues of chrome parts, clear sprue, red and clear tubing and big rubber tires for the back and front. The build up was done straight out of the box with...

MSRP:
Now: $29.99
Was:
1/25 Scale. This kit comes from the old Custom Car Parts series. Atlantis has retooled and fixed many of them to bring this kit back to life. The kit is molded in white, with chrome parts and newly...