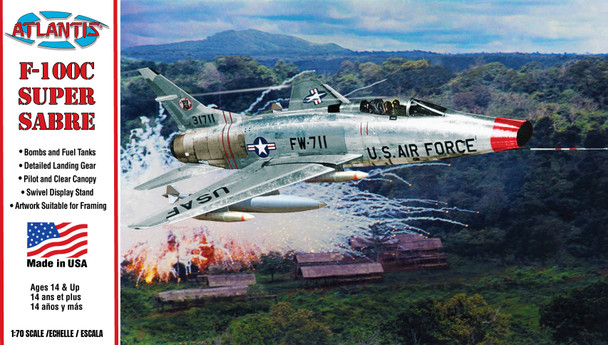 SKU:
H236
UPC:
MPN:
Condition:
New
Availability:
Usually Ships in 24hrs.
Shipping:
Calculated at Checkout
How long is the model when complete:
Measures 8.5 inches long with a wingspan of 6.5 inches
What age is recommended:
Ages 14 and up
What paints do I need:
We recommend Black, Khaki, Flesh, Silver, Red, White
Does it come with paint and glue:
Paint and glue are sold separately
How many parts are included:
37 parts

1/70 Scale. Comes crisply molded in silver and clear with our famous clear swivel stand. From the classic Revell tooling. Brought back to its original form. Complete with original decals and instructions. Brand new Artwork. Skill level 2.Interesting facts about your F-100C Super Sabre The North American F-100 Super Sabre is an American supersonic jet fighter aircraft that served with the United States Air Force from 1954 to 1971 and with the Air National Guard until 1979. The first of the Century Series of USAF jet fighters, it was the first USAF fighter capable of supersonic speed in level flight, clocked at 822 miles per hour. The F‑100 was designed by North American Aviation as a higher-performance follow-on to the F-86 Sabre air-superiority fighter. The F-100C was powered by a Pratt and Whitney J-57 Turbo-jet engine with afterburner, and is rated in the 10,000 pound thrust class. It had a wingspan of 38 feet with the wings sweeping back at an angle of 45 degrees and an overall length of 47 feet. Its armament consists of 4 x 20mm cannons and its fire power can be further increased by the use of externally mounted rockets. Adapted as a fighter-bomber, the F-100 was superseded by the high-speed Republic F-105 Thunderchief for strike missions over North Vietnam. The F‑100 flew extensively over South Vietnam as the air force's primary close air-support jet until being replaced by the more efficient subsonic LTV A-7 Corsair II. The F‑100 also served in other NATO air forces and with other U.S. Allies. In its later life, it was often referred to as the "Hun", a shortened version of "one hundred". By 1972, the F-100 was mostly phased out of USAF active service. In foreign service, the Royal Danish Air Force and Turkish Air Force F-100s soldiered on until 1982. Many F-100's have survived and are on display in Air Museums across the globe.The Black Panther squadron insignia illustrated on your box cover and supplied on your decal sheet is the insignia used for the 21st day fighter squadron (active until 1959) which will add some authentic detail on your Atlantis model.
View AllClose

Skipjack Oyster Boat Carrie Price 1/60 MADE IN THE USA

MSRP:
Now: $21.99
Was:
The Skipjack is a small sailing sloop used to dredge for oysters in the coastal bay areas. The Skipjack has a center board that is lowered when in deep waters to stabilize the boat while under full...

MSRP:
Now: $8.99
Was:
Monster Glow parts set F includes all the parts for everyone's favorite Aurora monster kit in 1/8 scale. Includes everything you see in the picture - head, hands, shoes, rope knot for waist, and foot...

MSRP:
Now: $21.99
Was:
1/54 Scale. Comes molded in blue and clear, with updated decals to complete either early or late version of F11F-1 in Blue Angels markings.  Detailed cockpit with Pilot and detailed landing gear. ...