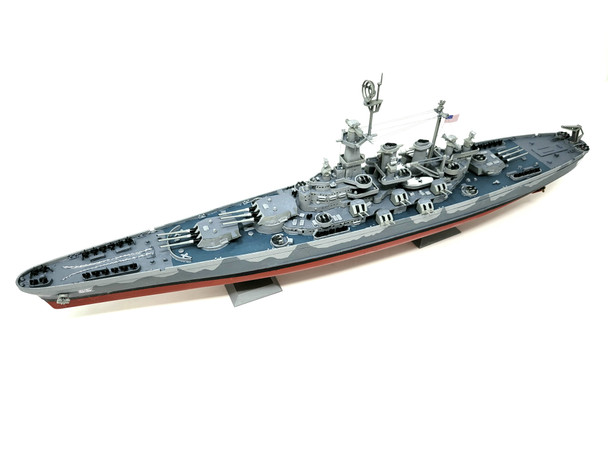 1/500 SCALE. This kit features 144 parts and measures 17 3/4 inches long. Molded in gray with display stand and decals for both Washington and Carolina battleships. Model was built and painted by Guy Malone.

The US Battleship North Carolina (BB-55), lead ship of a class of 35,000-ton battleships, was built at the Brooklyn Navy Yard. The USS North Carolina was quickly nicknamed "The Showboat" because of all the attention she drew during her trials in New York Harbor. At the time of her commissioning on April 9th 1941, she was considered the world’s greatest sea weapon. Armed with nine 16-inch/45 caliber guns in three turrets, and twenty 5-inch/38 caliber guns in ten twin mounts, North Carolina proved a formidable weapons platform. Her wartime complement consisted of 144 commissioned officers and 2,195 enlisted men, including 86 Marines. In her modern version, the catapult-launched float planes have been replaced by Helicopters for observation service.
The North Carolina went to the Pacific in June 1942. She took part in the Guadalcanal campaign during the rest of that year, covering the initial landings there and participating in the Battle of the Eastern Solomons in August 1942. She was damaged by a Japanese submarine torpedo on September 15th that year, in an attack that also fatally damaged USS Wasp (CV-7), but returned to the Solomons combat zone after a few months' repairs. During an enemy air attack in the Battle of the Eastern Solomons, the North Carolina threw up such a fierce barrage from her anti-aircraft batteries that the mighty Carrier Enterprise signaled to her "ARE YOU AFIRE?!" due to all the smoke.
In November 1943, North Carolina assisted in capturing enemy positions in the Gilbert Islands. This began a pattern of operations for her that lasted for the rest of World War II: serving in the anti-aircraft screen of aircraft carrier task forces and occasionally using her heavy guns to bombard Japanese-held islands. In these roles, during 1944 she was involved in the Marshalls operation in January-February, attacks on Central Pacific targets through the late winter and spring, the Marianas invasion and Battle of Philippine Sea in June, and Western Pacific carrier strikes in November and December.
North Carolina continued her Western Pacific activities in 1945, participating in the invasions of Iwo Jima in February, and Okinawa in March and April. The battleship also screened carriers on raids throughout the combat zone, including attacks on the Japanese home islands.
Although this mighty naval battlewagon had been torpedoed, dive-bombed, strafed, shelled, and suffered many near misses, she had never been put out of commission by enemy action even though Tokyo Rose had reported her as sunk no less than 6 times during the course of the Pacific war!
By the time the mighty "Showboat" steamed into Tokyo Bay and dropped anchor on September 5th, 1945 after 40 months of action in the Pacific War, her score was admirable. She was credited with destroying 27 Japanese aircraft plus a large number of probables. During 9 major naval bombardments she destroyed literally billions of dollars worth of enemy shore installations, Naval units, and personnel. She was truly a major factor in the power that stopped the ascent of the "Rising Sun", and a stirring tribute to the many Americans who built, supplied, and manned her, and the few who were wounded and died serving her.
In 1961 the North Carolina was transferred to the State of North Carolina to become a memorial and museum at Wilmington, where she remains to this day.

MSRP:
Now: $5.99
Was:
Enkay Products has been an importer and distributor of hand tools, drill accessories, hobby tools and polishing accessories since 1952. Enkay's mission is to provide customers with a less expensive...

MSRP:
Now: $21.99
Was:
Flex-Pads put a New Angle on modeling with improved versatility and convenience! Made of flexible polyester abrasives and containing inner padded support the Flex-Pad provides evenly distributed...

MSRP:
Now: $21.99
Was:
1/54 Scale. Comes molded in blue and clear, with updated decals to complete either early or late version of F11F-1 In Blue Angels markings.  Detailed cockpit with Pilot and detailed landing gear...

MSRP:
Now: $21.99
Was:
1/535 Scale. Includes 2 Sea Planes with Crane, Gun Turrets rotate, Barrels elevate. Decals and instructions with flag sheet. Artwork can be framed.USS Iowa (BB-61) is the lead ship of her class of...

MSRP:
Now: $29.99
Was:
1/25 Scale. This kit comes from the old custom car parts. Atlantis has retooled and fixed many of them to bring this kit to life. The kit will be molded in white and chrome with newly tooled tires...