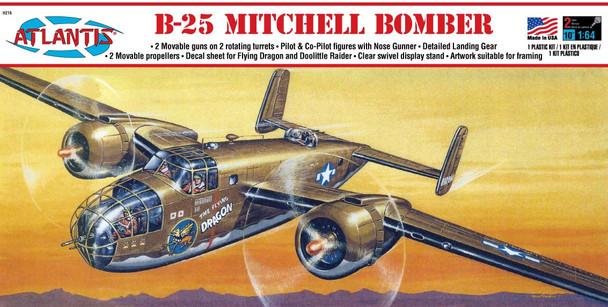 SKU:
H216
UPC:
850002740110
Condition:
New
Availability:
Usually Ships in 24 Hours
Shipping:
Calculated at Checkout
how big is this model:
Measures 10 inches long with a wingspan of 12.75 inches
what paints do you recommend:
Black, flesh, light gray, red, silver and yellow
How many parts:
55


The North American Mitchell Bomber had a wingspan of 67' 7". Fuselage length was 52' 11". Normally during WWII this version of the B-25 carried four .50 cal. machine guns in two revolveing turrets and one in the nose. The Aircraft flown in the famous Doolittle raid had their lower turret removed. General James Doolittle, whose B-25 led a squadron on 25 other B-25'S on the first devastating raid on Tokyo from the USS Hornet Aircraft Carrier on April 18th, 1942. The crew consisted of 5 Airmen. This kit can be built for either version

MSRP:
Now: $4.99
Was:
1/92 Scale. You are puchasing the decals only as the kit has sold out for the Jolly Rogers Pacific Raider.

MSRP:
Now: $24.99
Was:
1/96 Scale. From the Original Aurora Tooling which was updated by Monogram in the late 1970's. Kit is molded in white with clear part for windshield. Decals for Eastern and Early TWA Airlines. ...