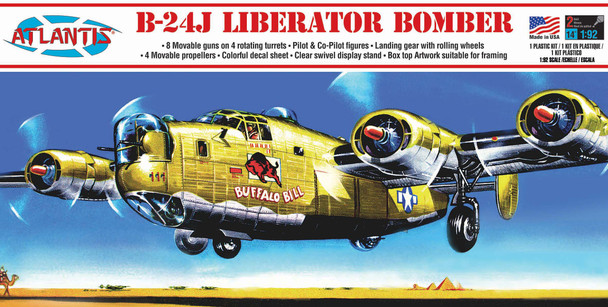 SKU:
H218
UPC:
850002740042
MPN:
Condition:
New
Availability:
Usually Ships in 24 Hours
Shipping:
Calculated at Checkout
How long is the model when complete:
Measures 9 inches long with a wingspan of 14.5 inches
What age is recommended:
Ages 14 and up
What paints do I need:
We recommend Black, Flesh, Light Gray, Red, Silver and Yellow
Does it come with paint and glue:
Paint and glue are sold separately
How many parts are included:
60 parts

1/92 Scale. Kit features 8 movable guns on 4 rotating turrets, Pilot & Co-Pilot figures, Landing gear with rolling wheels, 4 movable propellers, Colorful decal sheet, Clear swivel stand that revolves to any position. Beautiful color box art can be framed.  Check out the B-24 review from Dem BruddersCyber Modeler B-24 Review History of Your Consolidated B-24J LiberatorAmong the truly great aircraft of World War II, few acheived the status of the famous B-24 Liberator. This aircraft participated in most of the mass raids in Europe, and when the scene shifted to the Pacific Theater, they were on hand to carry the war to the Japanese homeland. This durable heavy bomber was seen in all fighting zones in a variety of roles, ranging from bomber, transport, and tanker to photo reconnaissance and trainer. These 4 engine giants established new distance records and were the most widely used heavy bombers in the war.Of the 18,188 Liberators produced for the US Army, 6,678 were B-24Js. The J variant received a modified, hydraulically powered nose turret and improved autopilot, and bombsight. They had a wingspan of 110 feet; length was 67 feet 2 inches; and they stood 18 feet high. Powered by 4 Pratt & Whitney R-1830-65 fourteen cylinder engines, they had a top speed potential of 300 mph and a service ceiling of 28,000 feet. Maximum bomb load was 12,800 pounds. The crew varied from 8 to 10 men and the B-24J carried ten .50 caliber machine guns for protection.
View AllClose

MSRP:
Now: $21.99
Was:
1/48 scale. This kit has not been reissued since the 1970's. Comes molded in olive drab with flexible rubber tracks. Instructions and 3 crew figures included. Decals for US and West German versions...

MSRP:
Now: $21.99
Was:
1/135 Scale. This Convair 990 Airliner comes from the vintage Revell tooling. All new box art and NASA decals created by Starfighter Decals with box art by Rusty Cowart. This mold needed some work as...

MSRP:
Now: $21.99
Was:
Officially licensed by the Department of the Navy. Look for the Official Navy Hologram on our Kit. This kit comes in at 1/136 Scale with 20 parts.  The kit comes molded in Navy Blue with the clear...