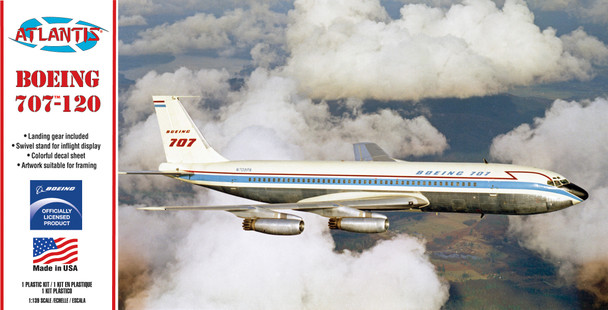 SKU:
H246
UPC:
850002740738
MPN:
Condition:
New
Availability:
Usually ships in 24hrs.
Shipping:
Calculated at Checkout
How long is the model when complete:
Measures 12.5 inches long with a wingspan of 11 inches
What age is recommended:
Ages 14 and up
What paints do I need:
We recommend Black, White, Gray, Silver, and Red
Does it come with paint and glue:
Paint and glue are sold separately
How many parts are included:
66 Parts

Check out the review of the kit at Dembrudders


With the introduction of the fabulous 707 in 1958, Boeing was able to trim the time for coast-to-coast flights to around five hours, depending on prevailing winds. This was a tremendous time saver for passengers and a number that has not been improved on since.The Boeing 707 had a wingspan of 130 feet 10 inches, an overall length of 144 feet 6 inches, a wing sweepback of 35 degrees, and a maximum weight at takeoff of 247,000 lbs. It had a cruising speed of approximately 575 mph, an operational altitude of up to 40,000 feet, and a transcontinental non-stop range. The Flagship could carry up to 150 passengers in air-conditioned comfort and luxury. As a result of the specially designed window arrangement, they were afforded greater visibility of the wondrous sights to be seen during flight. The militaries of the US and other countries have used the civilian 707 aircraft in a variety of roles, and under different designations. The Boeing E-3 Sentry was a US military airborne warning and control system (AWACS). There was also an E-6 Mercury Airborne Command and Control version. The Northrop Grumman E-8 Joint STARS is an aircraft modified from the Boeing 707-300. Also, the VC-137C variant of the Stratoliner was a special-purpose VIP design meant to serve as Air Force One, the secure transport for the President of the United States from 1962 to 1990.
Trans World Airlines flew the last scheduled 707 flight for passengers by a US carrier on October 30, 1983, although 707's remained in service by airlines from other nations for much longer. As of 2019, only a handful of 707s remained in operation, acting as military aircraft for aerial refueling, transport, and AWACS missions.